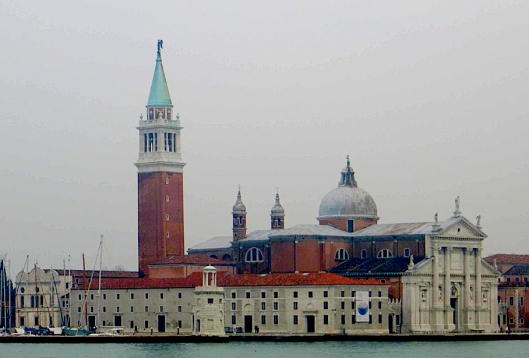 In an earlier post, I discussed a 15th century Rhenish School-style reliquary located at the Church of Saint Michael (St. Michaelskirche) in Munich.  The reliquary purportedly contains the skulls of Saints Cosmas and Damian, although as I noted in the post, other churches are also said to possess the saints’ skulls. The Church of San Giorgio Maggiore in Venice is one, and on a recent trip to Venice, I decided to find out whether the church really did posses relics of Saints Cosmas and Damian.

We arrived at San Giorgio Maggiore[1] by vaporetto at dusk. The church was dark and looked deserted, so we were afraid it might be closed. Nevertheless, we gave the door a 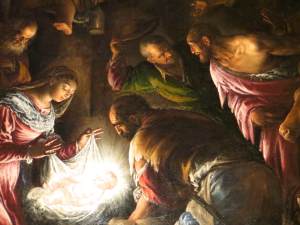 hopeful nudge, and it yielded freely. The church was open. Inside, a few tourists shuffled through the aisles, straining to catch a glimpse of the church’s treasures – paintings by Tintoretto,[2] Sebastiano Ricci, and Jacopo Bassano[3] – in the fading light, but it was no use. All sense of depth, line, and color seemed to dissolve in the gloaming, and the tourists quickly lost interest. Soon enough, they left, and in the sepulchral stillness of the empty church, we began our search for the skulls of Saints Cosmas and Damian in earnest.

We looked for traces of the saints in the gathering darkness. Were the skulls housed in an elaborate metal reliquary? Were they displayed in sturdy glass cases? Were they 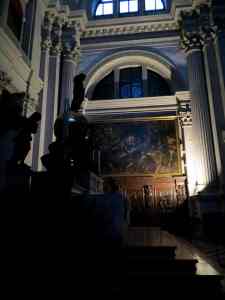 even in the church proper rather than in a separate treasury or crypt? We hurried past fading altars, their angels and saints winking at us in the dim light of votive candles. We peered at statutes, examined chiseled writing, and contemplated the high altar. No sign of the saints. 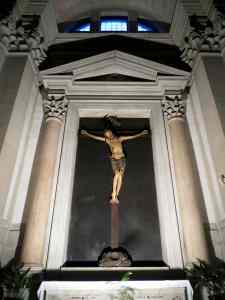 The second priest looked uncertain, and he shook his head as he began to answer. “I don’t know about their skulls,” he said. “But, there is an altar of Cosmas and Damian.  Their bones are kept there.” I was elated, and I asked him excitedly where we might find the altar. “It is on the right side,” he explained. “Next to the large crucifix.”

I knew exactly where he meant. Earlier, I had paused before an imposing wooden crucifix, riveted by its wrenching depiction of Christ on the cross.[4] Next to it, we found the altar of Saints Cosmas and Damian. A large painting, the Martyrdom of Saints Cosmas and Damian, attributed to the workshop of Tintoretto, hung above it. We had missed it in the darkness!  (A black and white image is available here.)

One of the saints is shown in the lower lefthand corner of the painting, his left hand outstretched but tied to a cross that is resting on the ground. One of his persecutors binds his legs to the cross while another monitors his progress. In the upper righthand corner of the painting, his brother is securely bound to another cross, which has already been raised off the ground. In the background, archers loose arrows at him while other figures appear to hurl rocks. According to tradition, the saints were unharmed by attempts to kill them with arrows, by stoning, and by crucifixion. They were eventually beheaded, along with several other brothers, who also appear in the painting, crowned with halos. An angel, tumbling into the scene from heaven, bears palm fronds in his right hand, symbols of martyrdom.

With the aid of a small flashlight – it was truly dark by now – we found a plaque secured above the altar.  It read: “OSSA SS · MAR · COSME ET DAMINI IACENT HIC” (Here Lie the Bones of Saints, Martyrs, Cosmas and Damian). We had found their bones.

[2] Tintoretto’s celebrated The Last Supper hangs to the right of the high altar, in the presbytery. Painted in the Mannerist style, Tintoretto’s The Last Supper differs from other depictions of the Last Supper in striking ways. For example, the table at which Jesus and the Apostles share their meal is shown at an angle rather than head-on, as in many depictions of the Last Supper (for example, Leonardo da Vinci’s famous rendition at the Convent of Santa Maria della Grazie in Milan.) Additionally, Jesus and the Apostles are not the only figures present in the scene. Although the eye naturally settles on Jesus, who is surrounded by a brilliant aureole of light, and the Apostles, who are distinguished by halos (except for Judas), some of the largest figures in the painting are ordinary men and women who have prepared and are serving the meal.

[3] Jacopo Bassano’s Adoration of the Shepherds hangs above the first altar on the right side of the nave.

[4] The crucifix is most likely one that was donated to the church in 1468.  The crucifix’s deteriorating, polychrome paint was restored in 1984 by the Venice in Peril Fund. Venice in Peril, “Church of San Giorgio Maggiore,” available at http://www.veniceinperil.org/projects/church-of-san-giorgio-maggiore. A sign below the crucifix read “HIC IACET CORPUS S · EUSTACHII PAT · CONST·” (Here Lies the Body of Saint Eustace, Father of [Saint] Constantius) indicating it hangs above the tomb of Saint Eustace.  (I briefly discussed Saint Constantius in an earlier post about the Waldauf Chapel in Austria.)  For a modest €0.50, were able to illuminate the crucifix for two minutes enabling us to capture a photograph of it.