In her 2008 study of Charlemagne, Charlemagne: The Formation of a European Identity, Rosamond McKitterick observes, “Charlemagne, king of the Franks from 768 to 814, is one of the few major rulers in European history for whom there is an agreed stereotype.”[1]  Celebrated as a mighty conqueror, a pious Christian ruler, and an enlightened patron of learning, Charlemagne is memorialized throughout Europe, particularly in the lands of his former empire.  McKitterick notes, “Statues and paintings of Charlemagne abound in many of the cities of Europe, whether major capitals such as Paris or towns that have often long since lost their political pre-eminence.”[2]  His likeness “graces the market place in Aachen . . . and the cathedrals of Bremen, Frankfurt and Halberstadt.  He surveys the cities of Zurich, Dinant and Liège, and he sits astride his horse in front of Notre Dame in Paris.”[3]  Reverence for Charlemagne is, perhaps, strongest in Aachen, Germany, where Charlemagne continues to be not only honored as the first Holy Roman Emperor but also venerated as a saint.  But was Charlemagne, in fact, ever a saint? 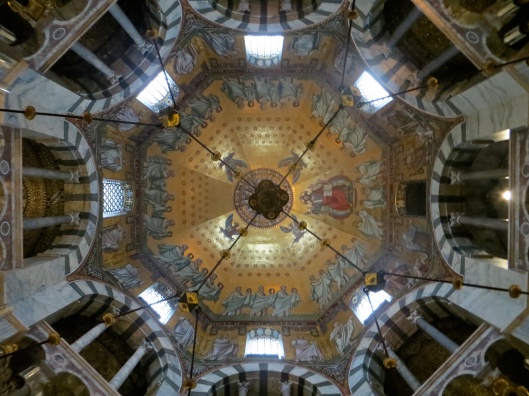 Playing with the King of Hearts

Of the four kings represented in a deck of cards, only the King of Hearts sports a clean-shaven upper lip; however, as Professor Paul Freedmen has noted in his lectures on medieval history, the Carolingians, of whom Charlemagne was a member, were well-known for their moustaches.[4]  More evidence militating against this interpretation can be found at Aachen, the former imperial capital.  The famous reliquary bust of Charlemagne in the Treasury of Aachen Cathedral clearly portrays Charlemagne with a moustache, suggesting the King of Hearts cannot be the famous Holy Roman Emperor.  Notably, Charlemagne also never stabbed himself in the head, another “fatal” flaw in the historical conceit linking the two royal heads.

How do we know what Charlemagne looked like?  Einhard’s Vita Karoli, written sometime between 817 and 833, provides one of the earliest written descriptions of Charlemagne, including an account of his physical appearance.  In the preface to his work, Einhard, a Frankish courtier and contemporary of Charlemagne, explained that he had committed the story of Charlemagne to writing so that “the most glorious life of this most excellent king, the greatest of all the princes of his day, and his illustrious deeds” should not become “wrapped in the darkness of oblivion.”[5]  Elegantly written in Ciceronian Latin, Einhard’s biography has proven to be one of the most influential and enduring portraits of the ancient king.[6]

The High Altar of Aachen Cathedral

Part of Vita Karoli’s popularity may derive from its disarmingly honest depiction of Charlemagne.  Einhard tells us, for example, that Charlemagne was “large and strong, and of lofty stature, though not disproportionately tall (his height is well known to have been seven times the length of his foot) . . . .”[7]  Additionally, “the upper part of his head was round, his eyes very large and animated, nose a little long, hair fair, and face laughing and merry.”[8]  His appearance was “always stately and dignified, whether he was standing or sitting, although his neck was thick and somewhat short, and his belly rather prominent.”[9] He enjoyed red meat, and his favorite book was Saint Augustine’s The City of God.[10]

As McKitterick explains, “The scholarly reaction to Einhard’s account has ranged from uncritical acceptance to outright rejection of its historical validity.”[11]  Still, “as a reflection of perceptions of Charlemagne and knowledge available about him at the time Einhard wrote, . . . it is immensely valuable.”[12]

The Canonization of Saints

While Einhard’s admiration for Charlemagne is evident in his writing, Einhard never referred to Charlemagne, either figuratively or literally, as a saint.  From the Vita Karoli we learn that Charlemagne died on 28 January 814 at the age of seventy and that he was buried on the same day.  Because Charlemagne never indicated where he wanted to be laid to rest, confusion arose as to where he should be buried.  Eventually, “all agreed that he could nowhere be more honorably entombed than in the very basilica that he had built in the town [of Aachen] at his own expense.”[13] 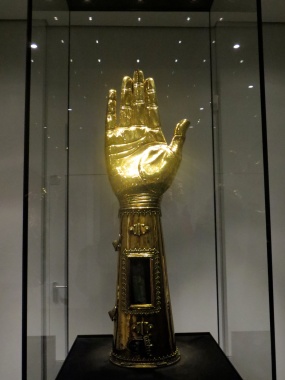 A local cultus eventually developed around the storied king; however, only the Church could officially recognize the beatification or canonization of individuals.  As Monsignor P. E. Hallett explains in his study on canonization, the Church constantly “had to guard against the extravagant and unauthorized devotion of the people.”[14]  Indeed, Charlemagne himself was the author of a synodal law designed to check the arbitrary veneration of alleged saints.[15]  The law, which prohibited the public veneration of new saints without the official sanction of the local bishop, was intended to prevent the type of mistake Saint Martin of Tours once encountered in his diocese.[16]

According to the legend, the people of Tours highly honored a shrine believed to be the tomb of a martyr.  Saint Martin, however, had his doubts.  As Rev. Alban Butler explains, “The place was much reverenced by the people; but St. Martin, who was not over credulous, would not go thither to pray, not hearing any assured account of the relics.  He asked the eldest of the clergy what they knew of them, and not receiving satisfaction, he went one day to the place with some of his brethren, and, standing over the tomb, besought God to show him who was buried there.  Then turning to the left he saw near him a pale ghost of a fierce aspect, whom he commanded to speak.  The ghost told his name, and it appeared that he had been a robber who was executed for his crimes, whom the people had honoured as a martyr.  None but St. Martin saw him; the rest only heard his voice.  He thereupon caused the altar to be removed; and freed the people from this superstition.”[17]

Until the 12th century, local bishops could beatify individuals by permitting public cultus, that is, the “erection of altars, the celebration of feasts, the offering of Holy Mass in their honour within the limits of their diocese.”[18]  Today, however, only those whose cultus has been accepted, either expressly or tacitly, by the Holy See are considered beatified, and only those whose cultus has been extended to the Universal Church are considered canonized saints.[19]

The cultus of Charlemagne provides an illuminating example of this system of recognition.  Three and a half centuries after his death, in 1165, Charlemagne was canonized by the anti-pope Paschal III.[20]  The Catholic Church never officially recognized Paschal III’s canonization of the Carolingian emperor, however,[21] and in fact, all of Paschal III’s pronouncements were eventually abrogated in 1179 by the Third Lateran Council.[22]  This wholesale repudiation of Paschal III and his decisions would presumably have included his canonization of Charlemagne.[23]

Despite the rejection of Charlemagne’s canonization, a local cultus that had developed around the emperor persisted and spread to parts of Germany, Belgium, and France.[24]  No subsequent pope protested the cultus, so it endured for several centuries with the tacit permission of Rome.[25]  In the 18th century, Pope Benedict XIV confirmed the cultus, though apparently not as an official papal act.[26]  Ultimately, because the cultus continued to exist with the permission of the Church, Charlemagne is considered beatified.[27]  Charlemagne, therefore, can be referred to as Blessed Charlemagne; however, he is not Saint Charlemagne.[28]

The Shrine of Charlemagne at Aachen

Charlemagne is believed to have been initially buried in a marble sarcophagus from the 3rd century.[29]  His body was later transferred to a more ornate and impressive golden shrine commissioned by Emperor Frederick II in the late 12th century.[30]  The shrine, which is sometimes referred to as a reliquary, was created between 1182 and 1215.[31]  The “Concise Guide to Aachen Cathedral,” a tourist pamphlet available for purchase at Aachen, states that Charlemagne’s bones have been housed in the shrine since 1215.[32]  It further notes that the “Emperor’s bones are surrounded by sixteen of his successors” depicted on the shrine, and “Charlemagne himself sits at the end wall below Christ giving a blessing, flanked by Pope Leo III and Archbishop Turpin of Reims.”[33]

On the day we visited the cathedral, the guide who led our tour stated the sixteen kings represented on the shrine were included instead of saints because Charlemagne’s status as a saint was uncertain.  From afar, the royal figures have the aspects of saints, but on closer inspection, they wear crowns rather than mitre or halos, and they hold symbols of secular power rather than instruments of martyrdom.

[1] Rosamond McKitterick, Charlemagne: The Formation of a European Identity 1 (2008).

[4] Paul H. Freedman, Charlemagne, Class Lecture for The Early Middle Ages, 284-1000 at Yale University (Nov. 9, 2011).  Professor Freedman contrasts the short hair and moustaches of the Carolingians with the long hair and beards of their rivals, the Merovingians.  Freedman states, “one of the symbols of Merovingian familial prestige was this long hair. But Carolingians had short hair and wore mustaches. They kind of broke with the Merovingian look. But of course, this is not just a male fashion statement.”

[20] Id.  By canonizing Charlemagne, Paschal III hoped to gain the support of the emperor, Frederick Barbarossa, in his struggle against the legitimate pope, Alexander III.  Id.

[28] See Benedictine Monks of St. Augustine’s Abbey, supra note 27, at 62.  The Book of the Saints lists Charlemagne as beatified though not canonized, noting that “in some churches” he has been “honoured as a Saint.”  Id.

4 thoughts on “Charlemagne: Saint of the Holy Roman Empire?”