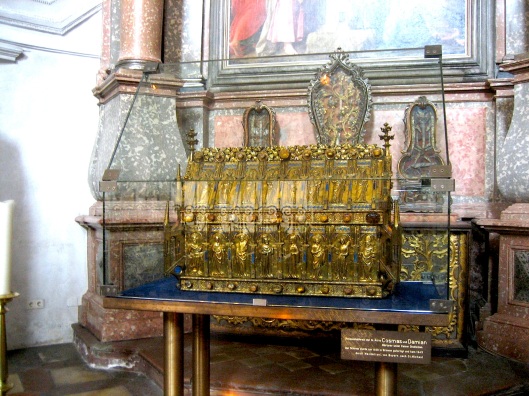 Reliquary of Saints Cosmas and Damian

The reliquary pictured above purportedly contains the skulls of Saints Cosmas and Damian, twin brothers who were martyred in Cyrrhus, Syria, around the 4th century. The Rhenish School-style reliquary, which dates to 1400, is currently located at Saint Michael’s Church in Munich, Germany. The lower portion of the reliquary, which is decorated with standing figures, contains two doors that open to display the saints’ skulls.

Saints Cosmas and Damian were skilled physicians who lived on the bay of Alexandretta in Cilicia in what is now modern-day Turkey. They are venerated as “moneyless ones” or holy “unmercenaries” because they refused to accept payment in return for their services. They are honored as patron saints of physicians, along with Saint Luke and Saint Pantaleon, and are often depicted with symbols of medicine or healing, including phials, boxes of ointment, and the rod of Aesculapius — a rod entwined with a serpent. In the paintings below by the Early Renaissance painter Giovanni da Modena, both saints appear to be carrying boxes of ointment. (The two works are part of the medieval sacred art collection of the Gemäldegalerie in Berlin.) 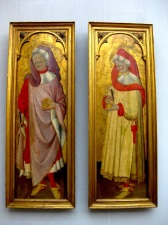 Although the exact date of their deaths is unclear, Saints Cosmas and Damian are believed to have died between 287 and 303 A.D. during the Great Persecution of the emperor Diolcetian. Following their martyrdom, a basilica was built in their honor in Cyrrhus, north of Antioch, and from there, the cult of Saints Cosmas and Damian spread to the rest of the Christian world. According to Butler, “The cult of SS Cosmas and Damian first reached Rome during the pontificate of St Symmachus (498-514; 19 July), who introduced it into an oratory near the basilica of Santa Maria Maggiore. But it was Pope St Felix III (526-30; 22 Sept) who translated their relics and built the basilica dedicated to them.”

Saints Cosmas and Damian are explicitly invoked in the Canon of the Mass and are included in the Litany of the Saints and the Roman Martyrology. In The Holy Sacrifice of the Mass, first published in 1902, Nikolaus Gihr notes that in the Roman Canon, “only martyrs are named before and after the Consecration: this distinction is justly due to them. They have merited it by the bloody sacrifice of their life; . . .” Their younger brothers Anthimus, Leontius, and Euprepius, who also died during the Diocletian persecution, are memorialized in the Roman Martyrology as well.

In addition to being patrons of doctors, Saints Cosmas and Damian are also patron saints of nurses, surgeons, pharmacists, dentists, barbers, and oddly (at least according to Butler), confectioners. The feast day of the saints, which had been celebrated on 27 September, was moved to 26 September to accommodate the feast of Saint Vincent de Paul.

In addition to Saint Michael’s Church in Munich, the convent of the Clares in Madrid and Saint Stephen’s Cathedral in Vienna also lay claim to possessing the skulls of the twin saints. Other relics of Saints Cosmas and Damian are apparently kept at the Church of San Giorgio Maggiore in Venice.