In his lush, elegant history of Venice, Venice: Pure City, Peter Ackroyd writes, “There was one great transformation in the early history of Venice.  In 828 an object was brought to this place that entirely changed its character and its status.”[1]  That object was the body of Saint Mark the Evangelist.

The association of Saint Mark with the city of Venice persists to this day.  The symbol of Saint Mark – a winged lion – is also the emblem of Venice.  Known as the Lion of

Saint Mark, the symbol is everywhere in the city.  Chiseled onto buildings, stamped onto tiles, and stitched into flags, it serves as a constant reminder of the enduring relationship between city and saint.  The glorification of Saint Mark in Venetian culture, however, came at the expense of another saint, Saint Theodore of Amasea.  Once Venice’s sole patron, Saint Theodore’s influence declined after Saint Mark’s arrival, although he is still afforded a place of honor atop a pillar in Saint Mark’s Square.

The Translation of the Relics of Saint Mark

The story of how Saint Mark’s relics eventually came to Venice is a remarkable one, and it has been the subject of various works of art throughout the centuries.  Tintoretto’s

Translation of the Body of Saint Mark, a stark, dramatic painting that has the eerie feel of a photo negative, may be one of the most recognizable.  Painted between 1562 and 1566 for the Scuola Grande di San Marco,[2] the work is part of the permanent collection of the Accademia Galleries in Venice.  (A companion painting, Discovery of the Body of Saint Mark, is located at the Brera Gallery in Milan.)  The glittering mosaics that adorn the exterior of Saint Mark’s Basilica also tell the story, in tessellated form, of the translation of Saint Mark’s relics.  For example, the mosaic located above the left doorway (the Door of Saint Alypius) of the west facade depicts Saint Mark’s body being carried into the basilica.  The mosaic, known as the Deposition mosaic, is the oldest exterior mosaic on the basilica and dates to 1260-1270.

Akroyd explains, “The body of Saint Mark was taken out of the sarcophagus and unwrapped from its silk shroud, the relic being substituted by another and less eminent saint.  It was then placed in a chest and taken on board the Venetian ship, the merchants first ensuring that the saint’s remains were covered by a layer of pork and cabbage.  When the Muslim officials asked to inspect the chest, they cried out ‘Kanzir, kanzir’ (Oh horror) at the sight and smell of the pork. . . .  Thus the evangelist was safely conveyed to Venice, but not before a number of miracles eased his passage across the Mediterranean.”[3] 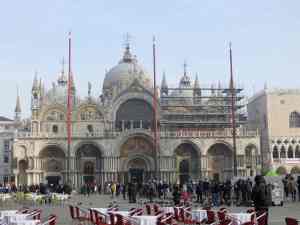 Saint Mark’s body was initially kept in a chapel at the Doge’s palace, a chapel originally dedicated to Saint Theodore, until a more suitable church could be built.  Begun in 829, the year after the translation of Saint Mark’s relics, the first church of Saint Mark was completed in 832.  This church was destroyed in 976 during a rebellion against Doge Pietro Candiano IV.  A second church was built in 1063 but was not consecrated until 1094, after Saint Mark’s relics, which had been lost in the years following the destruction of the first church, were rediscovered.

The Pala Feriale, an altarpiece of tempera and gold leaf on panel created by Paolo Veneziano and his sons in 1345 for Doge Andrea Dandolo, depicts the miraculous rediscovery of the relics.  Divided into two registers, the lower register of the Pala Feriale features seven panels portraying the story of Saint Mark, including the apparitio —  the self-revelation of Saint Mark’s relics in 1094.  According to tradition, the saint’s remains, which had been lost, revealed themselves to have been hidden inside a reliquary pier within the church.  Earlier depictions of the apparitio, however, seemed to suggest that despite the miracle of the apparitio, the reliquary pier itself was empty; Saint Mark’s body had turned to dust.  As one scholar has noted, “The miracle disclosed the location of the body but did not reveal the body itself.”[4]

In contrast, the Pala Feriale portrayed Saint Mark’s body as intact and physically present.  As Ana Munk explains in “The Art of Relic Cults in Trecento Venice,” “Paolo Veneziano’s shutters . . . may be the only scene among sixty-one representations of Saint Mark where the audience’s devotion to the saint in his problematic tomb within San Marco was recorded; every instance and effect of Saint Mark’s life, death, and his translation from Alexandria was documented in previous mosaics except the actual location of the body itself.”  The effect of these earlier depictions was to assure worshippers that Saint Mark was, indeed, present at the basilica – the Deposition mosaic clearly shows Saint Mark’s body entering the basilica – while leaving the exact whereabouts of his relics vague and uncertain.  As Munk observes, “the body of Saint Mark was simultaneously omnipresent and elusive.”[5]

In 1835, Giacomo Monico, Patriarch of Venice, exhumed the body of Saint Mark from the crypt beneath the basilica and placed it in the high altar.[6]  Before then, the saint’s body had apparently last been seen in the 12th century, dressed in ecclesiastical robes, when it was placed on display for five months for public veneration.[7]

During my visit to the basilica, Saint Mark’s simple, marble sarcophagus could only be viewed from behind the high altar.  The exterior of the sarcophagus was well lit and a short inscription applied to the stone in metallic letters read: “SALUTAT VOS . . . MARCUS FILIUS MEUS.”  This inscription was followed by a citation in much smaller letters below the word “MEUS.”  The citation read “1 Petri 5.13,” the source of the abbreviated quote on the tomb.  The front of the sarcophagus apparently proclaims “CORPUS DIVI MARCI EVANGELISTAE” (Body of the Divine Mark, Evangelist).[8]  When I visited, it was Christmas Eve, and in addition to the poinsettias and other decorations installed around the basilica in preparation for Midnight Mass, someone had placed two, single red roses on top of the sarcophagus.

[3] Akroyd at 37-38.  In his book The Secret Lives of Buildings, Edward Hollis identifies the two Venetian merchants as Buono da Malamocco and Rustico da Torcello, and he names Saint Claudia as the saint whose relics replaced those of Saint Mark in Alexandria.  Hollis writes, “At the time Alexandria was in the sway of the Fatimid caliphate; but two merchants of Venice, by the names of Buono da Malamocco and Rustico da Torcello, went to the city and found an old church dedicate to Saint Mark the Evangelist.  Saint Mark had been martyred in Alexandria, and his remains had been kept in this church ever since.  The two merchants spoke with the guardians of the saint.  They were in danger, these priests said, for the governor of Alexandria intended to demolish their church and send its marbles and columns to the caliph’s new palace in Babylon. . . . One night, under the cover of darkness, the priests let them into the church.  Torcello and Malamocco took the body of Saint Mark and substituted it with the body of another, less exalted martyr, Saint Claudia . . . .”  Edward Hollis, The Secret Lives of Buildings 50 (2009).

[4] Ana Munk, “The Art of Relic Cults in Trecento Venice: Corpi Sancti as a Pictorial Motif and Artistic Motivation,” 30 Radovi Instituta za Povijest Umjetnosti 81, 88 (2006) (citations omitted).  In Hollis’s telling, Saint Mark’s body appears, lifeless but fully formed, from the reliquary pier.  After chanting and praying intensely for the recovery of their missing saint, the Venetians at the new basilica noticed “a sweet smell began to pervade the church.  Suddenly, one of the piers to the right of the altar began to shake, and the masonry began to buckle.  With a crash and a roar, an arm appeared, then a shoulder, a torso, and a head; and then the whole body of Saint Mark fell lifeless onto the pavement of the sanctuary.  The doge Falier placed this body in a marble sarcophagus in the crypt, and the Heroon of the Venetians received its patron saint.”  Hollis, supra note 3, at 52.