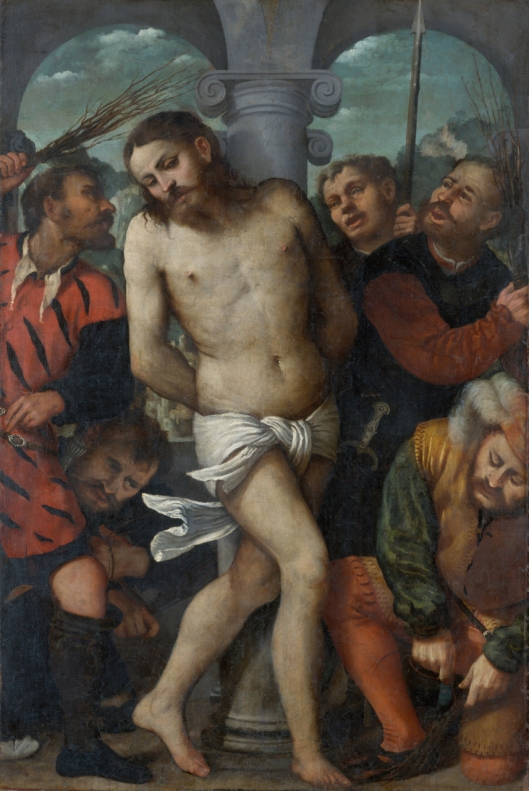 Of the many relics associated with the Passion of Jesus, the Column of the Flagellation (or the Scourging Post) is one of the more physically imposing.  Certainly, the significance of the Crown of Thorns, the Holy Lance, Holy Nails, pieces of the True Cross, and other first-class relics of the Passion cannot be understated.  However, the sheer size of the Column of the Flagellation lends it a physical presence unmatched by other relics of the Passion.

Three of the four gospels of the New Testament—those of Matthew, Mark, and John—refer to the Flagellation of Christ. In those tellings, Jesus is flogged by order of Pontius Pilate shortly before he is crucified.  Saint Mark‘s gospel, for example, states, “So Pilate, wishing to satisfy the crowd, released for them Barab’bas; and having scourged Jesus, he delivered him to be crucified.”[1] 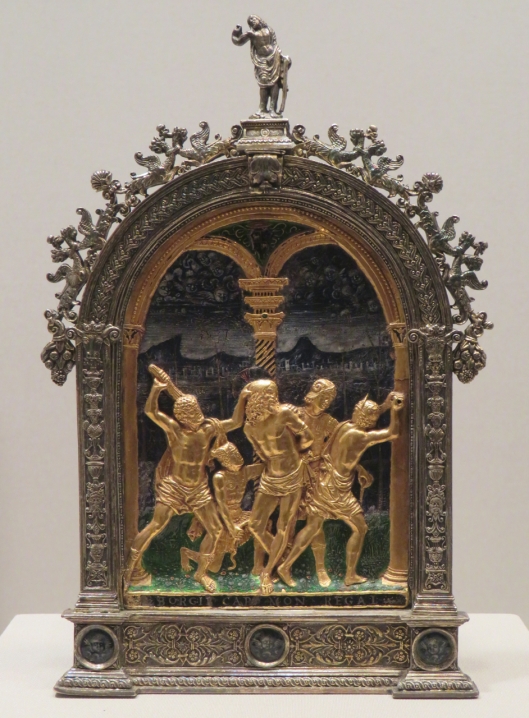 In art, the Flagellation of Christ, sometimes referred to as the Scourging at the Pillar, commonly depicts Jesus either tied or bound to a stone column being violently beaten, usually by two to four men.  Rainer Kahsnitz observes that “[a]s a whipping post, the Flagellation column was also one of the most important instruments of the Passion and regularly appears among the arma Christi,” literally the “weapons of Christ” or the instruments of the Passion.[2]

Mass of Saint Gregory (Die Messe des hl. Gregor) (detail), Master of the Saint Augustine Altarpiece (workshop) (circa 1500).  Germanische Nationalmuseum, Nuremberg, Germany.  According to legend, Christ appeared to Pope Gregory as the Man of Sorrows while he was celebrating Mass.  In this depiction of the Mass of Saint Gregory, the arma Christi, or instruments of the Passion, are clearly evident.  The Column of the Flagellation can be seen directly to the right of Jesus.  Photo by Reliquarian.

Whipping or scourging was not an uncommon form of punishment under Roman Law at the time—nor, indeed, was crucifixion.[3]  James Jeffers explains that crucifixion as a form of execution was intended to deliver a slow and excruciatingly painful death.[4]  He writes, “The condemned person’s weight was supported for the most part by his arms.  Muscle spasms, cramps and insects added to the pain, and death usually came through gradual suffocation.”[5]  Jeffers further notes that “Christians did not use the cross as a symbol in their artwork for the first two centuries, perhaps because of the shame people associated with death by crucifixion.”[6]

Interestingly, the Column of the Flagellation is sometimes also included in depictions of the Nativity.  Its presence in these scenes foreshadows the Passion and serves as a reminder of Jesus’ eventual crucifixion.[7]  Kahsnitz notes that the connection to the Passion “is particularly obvious when the column appears above a grate, an allusion to the cellar in Pilate’s house where the Flagellation took place.”[8]

Bladelin Altarpiece (Middelburg Altarpiece), central panel, Rogier van der Weyden.  Gemäldegalerie, Berlin, Germany.  The Column of the Flagellation sometimes appears incongruously in depictions of the Nativity.  Its presence is meant to foreshadow the Passion.  The grate below the column alludes to Pontius Pilate’s cellar where the Flagellation occurred.  Photo courtesy Wikimedia Commons.

The Column of the Flagellation is said to have been discovered by Saint Helena during a visit to Jerusalem in the 4th century.  The relic was eventually transported to Italy, and in the early 13th century, the column was installed in the Church of Saint Praxedes (Santa Prassede) in Rome by the appropriately named Cardinal Giovanni Colonna.  Colonna had served as Pope Innocent III’s papal legate in the Holy Land during the Sixth Crusade and later served as a priest at Santa Prassede.[9]  Today, the Column of the Flagellation is kept in a small side chapel in the Church of Saint Praxedes, displayed in a glass reliquary.  Saint Charles Borromeo was said to have been fond of the church and was known to have celebrated Mass in the Chapel of the Column on visits to Rome.[10] 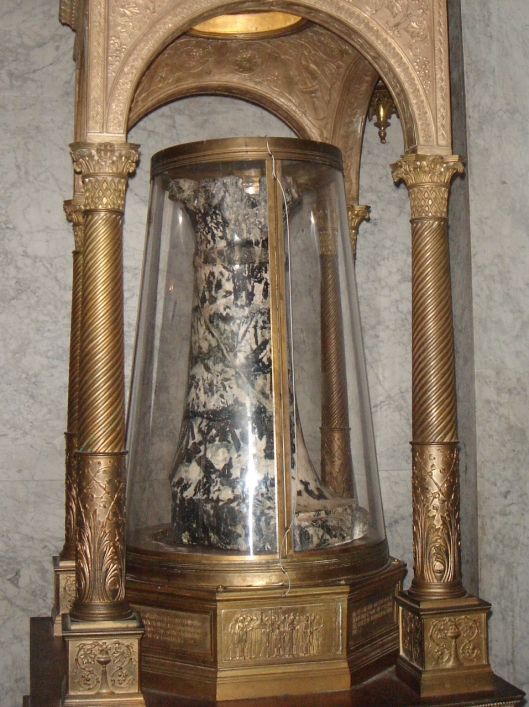 [4]  Id.  The term “excruciating” is quite appropriate here.  According to the Oxford English Dictionary, the word derives from the Latin excruciare, meaning “to torment” or more literally “from the cross.”