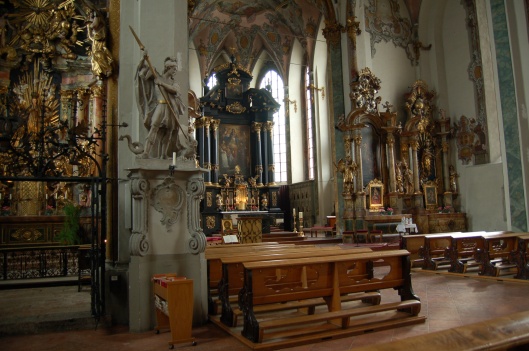 The Pfarrkirche (Parish Church) St. Nikolaus in Hall in Tirol, Austria — approximately 10 km from Innsbruck — houses an impressive display of holy relics. The Waldauf Chapel, located in the northern part of the nave, is named for Florian Waldauf zu Waldenstein, an Austrian knight who bequeathed his collection of relics to the church upon his death in 1501.

Pfarrkirche St. Nikolaus was established in 1281 and was initially Gothic in style.  Over the centuries, however, enlargement of the church and the addition of increasingly elaborate ornamentation changed the character of the interior, infusing it with a distinctly Baroque appearance.  The high altar, pictured in the distance above, is the work of Erasmus Quellinus II, a student of Peter Paul Rubens.  Interior frescoes were added in 1752 by Adam Mölk, a court painter to Empress Maria Theresa.

Florian Waldauf’s collection of relics adorns the northern wall of the eponymous chapel.  Dozens of skulls and an assortment of bones carefully arranged on red velvet cushions

line the interior of a large cabinet, its glass wavy with age.  Each skull is veiled with a gauzy fabric, blurring its features, and each is crowned with a golden halo.  The effect is grim but striking: glints of gold on ashen bones in the shadows of an ancient church.

The collection of relics in the Waldauf Chapel are not the only relics on display in the church, however.  Three additional cases along the northern wall, near the center of the nave, appear to contain the remains of additional saints, two of whom are clearly identified.  I’m not sure whether these relics are part of Florian Waldauf’s original bequest, but given the prominence of the displays, they are likely the most important of the church’s collection. 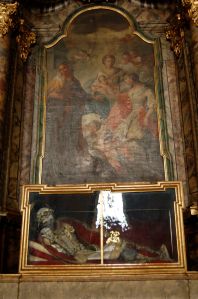 The most conspicuous display contains what appears to be a complete skeleton, recumbent, richly dressed in a red velvet cape, a heavily embroidered jacket, and white silk pants.  His right arm is bent at the elbow, and his head is almost poised on his gloved right hand.  The glove, probably of white silk, is decorated with jewels.  A golden crown formed of loosely gathered leaves adorns his skull, and the hint of a burnished halo is just visible above his head.  The case itself is not clearly labeled, so unfortunately I never discovered the identity of the skeleton.

In contrast, the two other repositories flanking the skeleton case are both clearly marked.  Each is built into the wall, above eye level, and each contains a single skull atop a pyramid of bones.  The first case is labeled in large, gold letters “St. Constantius M.”  The second case, similarly marked, reads “St. Agapitus M.”  The “M” following the names Agapitus and Constantinus refers to “martyr.”

The Roman Martyrology lists seven saints named Agapitus.  Saint Agapitus of Palestrina, for example, was fifteen when he was arrested by order of the emperor Aurelian.  According to the Roman Martyrology, he was first scourged and then “endured more severe torments, and being delivered to the lions by the emperor’s order without receiving any injury, he was finally struck with the sword . . . .”  After his death in 274, a basilica was erected in Palestrina, Italy, at the site of his beheading.  His relics are apparently kept there, though several relics were transferred to Besançon, France.  Consequently, the bones at Pfarrkirche St. Nikolaus cannot be those of Saint Agapitus of Palestrina. 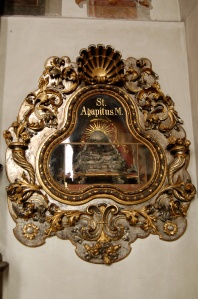