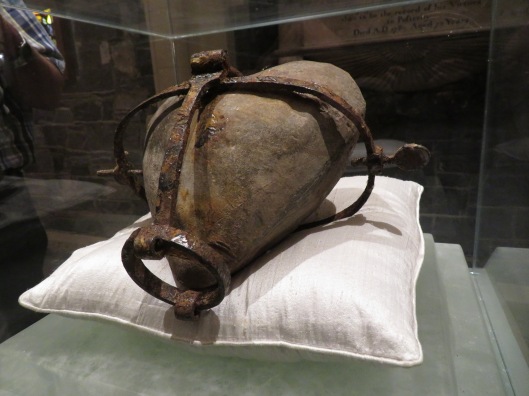 Christ Church Cathedral opened as usual at 9:30 AM on 4 March 2012.[1]  Visitors trickled in to view the cathedral’s many sights, including the tomb-effigy of Strongbow (Richard de Clare, 2nd Earl of Pembroke) on the south side of the nave, and the mummified bodies of “The Cat and the Rat,” recovered from the church’s organ frozen mid-chase, on display in the crypt.  (James Joyce mentioned both these unfortunate animals in Finnegan’s Wake.)[2]  One sight apparently not on view that morning was a curious relic of Saint Laurence O’Toole, a 12th century Archbishop and Patron Saint of Dublin.  The saint’s heart, preserved in a heart-shaped reliquary, had been kept in the cathedral since the 13th century.  Around lunchtime, however, cathedral officials made a startling discovery:  The reliquary was gone, along with the heart of Saint Laurence.[3] 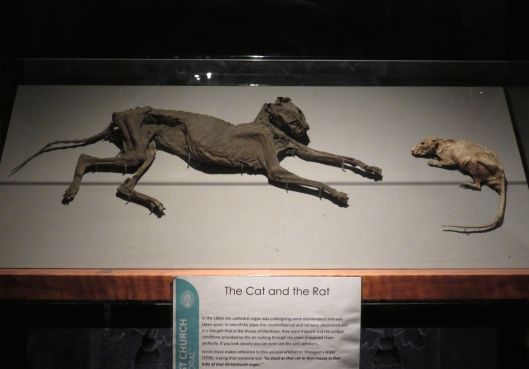 “The Cat and the Rat,” Christ Church Cathedral, Dublin, Ireland.  The mummified remains of a cat and a mouse were recovered from Christ Church’s organ in the 1860s.  James Joyce mentioned both these unfortunate animals in Finnegan’s Wake when he described a man as being “as stuck as that cat to that mouse in that tube of that christchurch organ.”  Photo by Reliquarian.

No one is quite sure when the heart went missing.  Evidence suggested the thieves acted deliberately and that they had stolen the reliquary overnight after hiding in the church before it closed.[4]  At the time, a spokeswoman for the cathedral noted that other valuable objects, including gold chalices and gold candlesticks, had been left untouched by the intruders.[5]  “It’s completely bizarre,” she proclaimed.  “They didn’t touch anything else.  They specifically targeted this, they wanted the heart of St Laurence O’Toole.”[6]  The dean of Christ Church Cathedral lamented that while the heart had “no economic value,” it was nevertheless a “priceless treasure” linking the church to its founding father, Saint Laurence O’Toole.[7]

Purloining the heart from Christ Church would have taken some effort and advanced planning.  At the time, the heart was kept in a small chapel known as the Peace Chapel of Saint Laud.[8]  The heart itself was housed in a heart-shaped reliquary, which was secured to the wall inside an iron cage.  The reliquary was further attached to the wall by a chain, though the chain may have been more aesthetic than functional.[9]  To extract the heart, the thieves surgically cut through the iron bars of the cage and detached the chain before making their getaway.  According to investigators, there were no other immediate signs of damage indicating a break-in.[10]

The Heart of the Matter

As noted above, Saint Laurence O’Toole (Lorcán Ua Tuathail) was not only an Archbishop of Dublin but also patron saint of the city.  Born in 1128 probably near Castledermot in County Kildare, Saint Laurence was appointed abbot of Glendalough at the age of 25.[11]  In 1162, he was elected Archbishop of Dublin upon the death of the city’s first archbishop, Gregory.  As archbishop, he was known for his discipline, generosity to the poor, and skill at negotiations.  As a negotiator, for example, he had been called upon to negotiate with a group of Norman knights, including Strongbow, who had marched on Dublin in an attempt to restore the deposed King of Leinster, Dermot McMurrogh.[12]  During the negotiations, however, “Dermot’s Anglo-Norman allies seized the city and gave themselves over to massacre and rapine.  Laurence returned to succour the sufferers and defend the survivors, and to be a centre of strength in the new danger.”[13]  Incidentally, in 1171, King Henry II of England, who had supported the Norman knights, arrived in Ireland.  That year, Henry II attended Christmas service at Christ Church and took communion for the first time since Thomas Becket was killed by his knights in Canterbury Cathedral in 1170.[14]

The heart shape (♥) we recognize as an ideogram for the heart or a symbolic representation of love or affection did not bear those associations at the time of Saint Laurence O’Toole’s death.  Geometrically the heart shape is a cardiodid, and it is a shape that occurs commonly in nature.[15]  It is, for example, evident in leaves and flowers and can be expressed in certain animal behaviors—imagine a pair of swans facing each other with necks bent and beaks touching.[16]  In art, the ♥ has been depicted since ancient times, but it was initially used to represent objects and ideas other than the human heart and romantic love.  Iain Gately notes, “The ♥ entered Western iconography via the Greeks, who used it to depict ivy or vine-leaves, respectively the symbols of constancy and regeneration.”[17]  Gradually the ♥’s association with constancy inspired a further association with courtly or romantic love.  In the medieval period, Gately explains, “[t]he ♥, indicating steadfast love for a damsel, and derived from the ivy leaf of Classical Grace,” became the emblem of romantic love and affection.[18]

Incidentally, the first depiction of someone offering his heart to another in a show of love can be traced to a 13th-century illustration in a manuscript known as the Roman de la poire (Romance of the pear).[19]  Significantly, the heart depicted in the manuscript does not bear the cardiodid form but, rather, is shaped like a pinecone.  The Greek physician Galen had described the human heart as appearing like a pinecone, and that misconception persisted for centuries.[20]  Still, the illustration in the Roman de la poire may be, in some roundabout way, the inspiration for the modern Valentine’s Day card.

Heart Reliquary of Saint Laurence O’Toole, Christ Church Cathedral, Dublin, Ireland.  The reliquary bears the cardiodid shape we associate today with the heart and emotions such as love and affection.  Photo by Reliquarian.

By the 15th century, however, the use of the ♥ as a symbol of love and a representation of the human heart had become well-established.[21].  For example, the iconography of the Sacred Heart, which developed during the Counter-Reformation, prominently featured the ♥ as a symbol of Jesus’ divine love.[22].  In these depictions, the Sacred Heart could be shown independently or emanating from Christ’s breast as a flaming heart, encircled with a crown of thorns, pierced and bleeding from a lance wound.  The ♥, however, also began appearing in non-secular contexts.  In 1480, for example, commercial playing cards in France began using the ♥, rather than more traditional cups representing the Holy Grail, to symbolize the clergy for a deck of card’s second suite.[23]

Media reports have described the reliquary of Saint Laurence O’Toole’s heart as being a “wooden box” or a “wooden heart-shaped container.”[24]  We note that a similar vessel, discovered at a different Christ Church—this one, located in Cork City, Ireland—which also contained a human heart, was made of lead.[25]  Both heart-shaped containers were discovered in the 19th century, though nearly 160 miles apart.  (The Cork City heart case, now in the collection of the Pitt Rivers Museum, can be seen here.  The embalmed heart it contained looks like an old, wadded up leather glove.)  According to the Journal of the Co. Kildare Archeological Society and Surrounding Districts, Saint Laurence’s heart was not rediscovered until the 19th century.[26]  The Journal states, “Some few years ago there was found among rubbish in vaults of Christ Church, Dublin, a sort of vessel in the shape of a heart.  It has been surmised that the heart of Saint Laurence is or was contained therein.”[27]. 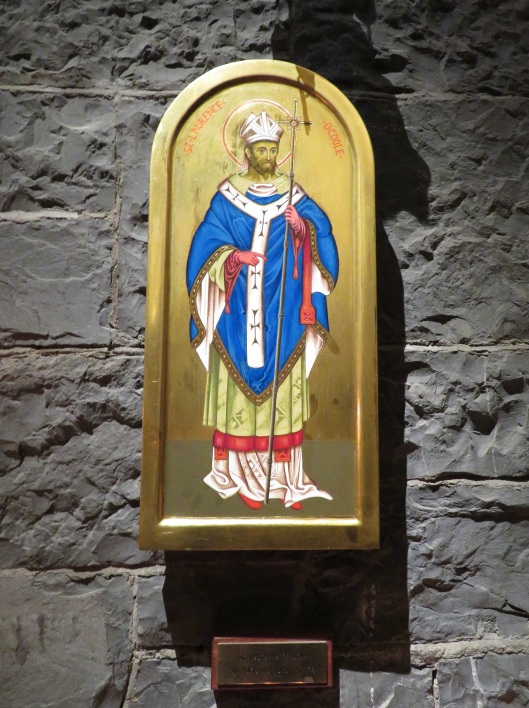 So, who created Saint Laurence O’Toole’s heart reliquary, and when was it created?  Those answers remain unclear, though given the art historical evolution of the ♥ symbol, the reliquary was likely made hundreds of years after the saint’s death and the translation of his heart to Dublin.  Today, the heart reliquary of Saint Laurence O’Toole is displayed in an arrangement designed by Eoin Turner, a Cork-based artist.[28]

Nearly six years after it was stolen from Christ Church, the heart reliquary of Saint Laurence was recovered and returned to its home in the cathedral.[29]  Some reports suggested the Gardaí were tipped off by the thieves themselves.  The Irish Examiner, for example reported that the thieves had come to believe Saint Laurence’s heart was cursed after several people close to them died of apparent heart attacks.[30]  At the time of this writing, no other cardiac arrests have occurred in connection with the Great Heart Heist of Saint Laurence O’Toole’s Preserved Heart.  The thieves remain at large.

[6] Sarah Burns, Heart of St Laurnce O’Toole To Be Returned Six Years After It Was Stolen, Apr. 26, 2018, Irish Times, https://www.irishtimes.com/news/ireland/irish-news/heart-of-st-laurence-o-toole-to-be-returned-six-years-after-it-was-stolen-1.3475027.

[19] Ben Davis, How Did the Heart Become a Symbol of Love?  The Clues Lie in This Medieval French Illustration, Feb. 14, 2019, Slate, https://news.artnet.com/opinion/heart-as-symbol-love-medieval-illustration-1464961 (describing the illustration as “the first artistic depiction of someone giving their heart to their beloved as a symbol of love”).

[25] Irish Archeology, A Medieval Heart-Shaped Reliquary from Cork City, Feb. 14, 2019, https://mail.google.com/mail/u/0/#drafts/KtbxLvhRZGJNhgNfcQrdHqKPxGFqSpHnwL (“This heart-shaped lead casket containing an embalmed human heart was discovered inside the medieval crypt of Christ Church, Cork city (now the Triskel Arts Centre) during the 19th century.  An unusual find, it is not without parallel in Ireland, as a similar example is also known from Christ Church Cathedral, Dublin.”); see also Human Heart in a Lead Heart-Shaped Case, Pitt Rivers Museum, http://objects.prm.ox.ac.uk/pages/PRMUID127977.html.

[27] Id. The Journal continues, “There is a tradition among the people of Eu that Saint Laurence’s heart, immediately after his death, was taken to his native country.  We know that it was not uncommon for people to leave in their wills, or when dying to ask their friends to take their heart and deposit it in some church or shrine to which they had a special devotion.”  Id.  The Journal then notes that many of Christ Church’s holy relics were lost when a portion of the cathedral’s roof collapsed in the 15th century or as a result of the Reformation.  “Whether this one survived by being hidden away, and then forgotten, to again come to light accidentally in the nineteenth century, is a matter of conjecture.”  Id.