Giorgione, The Adoration of the Shepherds, oil on panel (1477), National Gallery of Art, Washington, DC

One of the more remarkable relics on display in the Reliquary Treasury of Dubrovnik Cathedral is the “diaper” of Jesus.  The relic is displayed in a bulky silver reliquary, profusely ornamented with winged figures, clunky arabesques, and other decorative accents.[1] While most translations into English describe the relic as a “diaper” or “diapers,” it could more accurately be described as the “swaddling cloth” or “swaddling clothes” of Jesus.[2]

Veneration of Jesus’ swaddling clothes is more frequently associated with Aachen, Germany, where a more famous set of swaddling garments has been kept since the 13th century.  Housed in the golden Shrine of Saint Mary (Marienshrein) at Aachen Cathedral, the swaddling clothes (Windel Jesu) were rarely put on public display prior to the 14th century.[3]  Since then, the relic has been exhibited in Aachen approximately every seven years.[4]  In comparison, the swaddling clothes kept at Dubrovnik Cathedral are regularly displayed in the cathedral’s astonishing treasury of saintly relics.

In a paper on Jesus’ swaddling clothes, Sophie Oosterwijk explains that since antiquity, “medical tradition held that the newborn child might develop deformed limbs if left unswaddled; therefore, swaddling clothes were considered absolutely essential not just for ordinary infants but also for the Christ child.”[5] Consequently, until about the 14th century, depictions of the Nativity commonly showed the infant Jesus tightly swaddled, his face serene in a cloth cocoon.[6]

Some paintings of this period, however, show the infant Jesus unswaddled, presumably mere moments after his birth.  According to one tradition, Jesus’ struggling parents were forced to reuse Joseph’s hose, the only extra cloth they had at hand, as makeshift swaddling clothes.[7]  Paintings inspired by this story frequently portray Joseph removing his shoes and stockings or ripping his hose into strips as Mary waits nearby.  “Mary, take my hose and wind your dear baby in them,” Joseph tells Mary in an early 15th century Nativity painting from a church in Lezignan.[8]  In another, Joseph seated on the ground with one bare foot extended, carefully cuts his hose into strips with a knife while a recumbent Mary watches from a mattress.[9]  Rogier van der Weyden’s famous Columba Altarpiece has also been tied to this tradition, though Joseph’s stockings are portrayed more subtly:  two squares of cloth laid in Jesus’ manger have been interpreted as Joseph’s repurposed hose.[10]

Joseph Malouel?, Nativity, oil on tempera (c. 1400), Museum Mayer van den Bergh, Antwerp, Belgium (courtesy Wikimedia Commons). Here, Joseph can be seen cutting one of his stockings with a knife as Mary watches and the infant Jesus waits in a manger.

As Oosterwijk observes, the tradition of Joseph and his hose “illustrates the medieval need to explain the details of the Virgin’s reported confinement far away from the comfort of a regular nursery . . . , thus emphasizing Christ’s humility.  Instead, it is Joseph in his role of the family provider, rather than that of a natural father, who finds the solution for the lack of swaddling clothes by donating his own hose to cover the newborn Christ with in the cold winter night.”[11]

Adoration of the Magi (panel detail), Columba Altarpiece, oil on oak (c. 1455), Alte Pinakothek, Munich, Germany.  The two squares of cloth padding the manger at left have been interpreted as Joseph’s hose.

A curious book titled Excrement in the Late Middle Ages further explores the history and deeper theological meaning of Jesus’ swaddling clothes.  As the author, Susan Signe Morrison, notes, while stories about the baby Jesus’s swaddling clothes may seem “obscene or blasphemous,” they were, in fact, “produced within the confines of the sacred.”[12]  Miracles associated with Jesus’ swaddling clothes were described in the First Gospel of the Infancy of Jesus Christ — a work condemned as heretical in the fifth century — and in stories describing the return of the Wise Men to their home countries.

Returning to the Christmas story as told in Luke 2:12, Morrison explains that Jesus’s swaddling clothes were provided “not just to keep him warm or to bind him in an imitation of the closeness of the womb.”[13]  Rather, “[t]he clothes clearly perform a key function:  to collect the filth the human baby ejects.”[14]  Morrison further explains that the “enfleshing of Christ is both most sacred (he became man to save us) and most profane (he took on the flesh that emits filth for us).”  Morrison concludes, “To be human is to eat; to be fully human, God must digest just as a human does.  As Tertullian argued, by taking on the filthy human body, Christ signals his profound humility and compassion.  God has divested himself of his omnipotence; what more overt way to do this than to become a helpless, wriggling, filthy infant, utterly dependent upon others for nourishment, shelter, and personal hygiene?”[15]

[2]  For example, an older guide to the cathedral, translated into French and no longer in print, describes the relic as “des langes de Jésus.”  Id.

[7]  Incidentally, Saint Joseph’s hose is also purportedly stored in the Marienshrein, along with Jesus’ swaddling clothes, the robe of Saint Mary, and the beheading cloth of Saint John the Baptist.  Photographs of all four relics, which comprise the four great relics of the Marienschrein, can be found here.

[9]  The painting is the Nativity panel of a polyptych by an unknown artist, possibly Jean Malouel, painted c. 1400.

Virgin in a Blue Dress

In his superb book on Christian symbolism, Signs and Symbols in Christian Art, George Ferguson writes, “No other figure, except that of Christ Himself, was so often portrayed in Renaissance art as the Virgin Mary.”[1]  Ferguson further notes that Saint Mary was traditionally painted wearing blue, the color of truth and a symbol of the sky, heaven, and heavenly love.[2]  But did the historical Saint Mary actually wear blue?  Evidence preserved in various shrines suggests the Virgin’s blue wardrobe may have been an invention of Medieval and Renaissance artists.  These artists expressed their devotion to the Virgin by using a very scarce and very expensive pigment to paint her garments.  The pigment, known as ultramarine, was a deep, celestial blue. 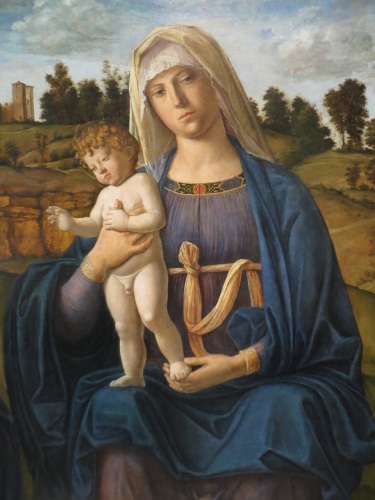 The Marienschrein and the Four Great Relics of Aachen

The Marienschrein, or Shrine of Saint Mary, at Aachen Cathedral in Aachen (Aix-La-Chapelle), Germany houses four great relics:  the cloak of Saint Mary, the swaddling clothes of the infant Jesus, the beheading cloth of Saint John the Baptist, and the loincloth worn by Jesus at his crucifixion.  The relics were rarely displayed publicly before the 14th century; however, since about the mid-14th century, the relics have been removed from the shrine approximately every seven years for public veneration.[3] 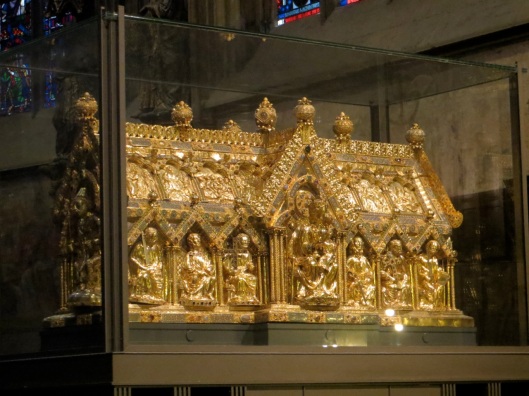 I am unsure exactly what color the relic of Saint Mary’s cloak is, or appears to be, today.  Judging by a picture of the garment taken when it was last displayed in 2007, the cloak appears to be flaxen in color, or yellowish gray, with possible hints of light blue along its hem.  It is certainly not the deep blue favored by Renaissance artists, though perhaps it has faded significantly over time.  Or perhaps it was never blue to begin with.  [NOTE:  See update below for additional information.]

One other clue to what color Saint Mary may have worn during her lifetime is preserved 300 miles southwest of Aachen, at Chartres Cathedral in Chartres, France.  One of the cathedral’s most famous stained-glass windows, a 12th-century window known as Notre Dame de la Belle Verrière (Our Lady of the Beautiful Glass), depicts the Virgin and Child in a sedes sapientiae (seat of wisdom) arrangement with the Christ Child seated on the lap of the Holy Mother.  Victoria Finlay, in her engaging study of color and pigments, Color:  A Natural History of the Palette, suggests the window shows the Virgin Mary in a blue veil.[4]  “The veil,” she writes, “is a pale color, light enough to allow the sun to flood through and depict the young woman’s purity.”[5]  However, “it is unmistakably light blue, and worn over a blue tunic.”[6]  She further notes that the glass-makers who created the window in 1150 “would have had the ‘real’ veil to model their design on, which is curious, because when you see the precious relic in its gold nineteenth-century box . . . it is not blue at all.  More of an off-white:  the faded clothing of the melancholy mother of a martyr.”[7]

The Madonna of the Stars, Jacopo Tintoretto, oil on canvas (second half of the 16th century), National Gallery of Art, Washington, D.C.

A Blue More Precious Than Gold

If the Virgin Mary did not wear blue, why did artists regularly paint her in blue garments?  Victoria Finlay offers several insights.  First, she explains that Saint Mary did not always wear blue in artistic representations.  In Russian icons, for example, the Virgin Mary more commonly wore red, and in Byzantine art, she often wore purple.[8]  On other occasions, she was portrayed in white to represent her innocence, or black to express her grief.[9]  Finlay also observes that artists commonly dressed her in a manner to honor her, and their choice of color was frequently decided by cost and rarity.[10]  She writes, “In fifteenth-century Holland, Mary often wore scarlet because that was the most expensive cloth; the earlier Byzantine choice of purple was similarly because this was a valuable dye, and only a few people were important enough to carry it off.  So when, in around the thirteenth century, ultramarine arrived in Italy as the most expensive color on the market, it was logical to use it to dress the most precious symbol of the faith.”[11]

The deep, rich ultramarine prized by the artists of the Renaissance derived from lapis lazuli, an intensely blue, semi-precious stone found in only a few places on Earth.  For artists such as Michelangelo, Titian, and Dürer, the only source of ultramarine was Afghanistan, a “mythical land so far away that no European . . . had actually been there.”[12]  Finlay notes that ultramarine was once “the most valuable paint material in the world,” and artists such as Michelangelo would have had to wait for their patrons to procure it for them because they could not afford it on their own.[13]  Given its tremendous cost and unquestionable rarity, then, it is not surprising that so many artists chose to clothe the Virgin Mary in ultramarine.  Fortuitously, ultramarine also happens to be a serene and majestic color, one truly appropriate for the Queen of Heaven.

[UPDATE, 27 JUNE 2014.] The following description is from the Aachen Pilgrimage 2014 (Heiligtumsfahrt 2014) website: “St. Mary’s robe is an ancient work of domestic embroidery. . . .  It is made of naturally coloured linen and is embroidered with vertical and horizontal lines in a grid pattern.  In Israel flax and cotton were only to be found on the coast and in the lowlands of Jordan . . . .”  The website further notes that the dress is 153 cm long; the seam circumference is 246 cm; and the span of the sleeves is 132 cm.  The Aachen Pilgrimage 2014 homepage can be found here.  More information about the cloak of Saint Mary can be found here.  A picture of the robe can be viewed here. 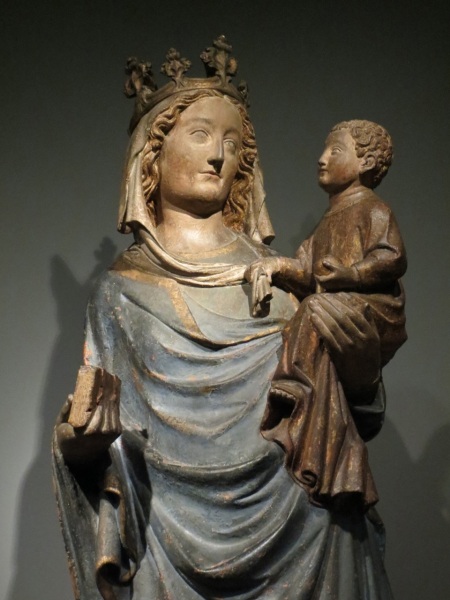 Aachen Cathedral with High Altar and Pala d’Oro in foreground and Marienschrein (Shrine of Saint Mary) behind.  Hanging from the vault above the choir is a wooden medallion of the Madonna and Child carved by Jan van Steffesweert of Maastricht in 1524.