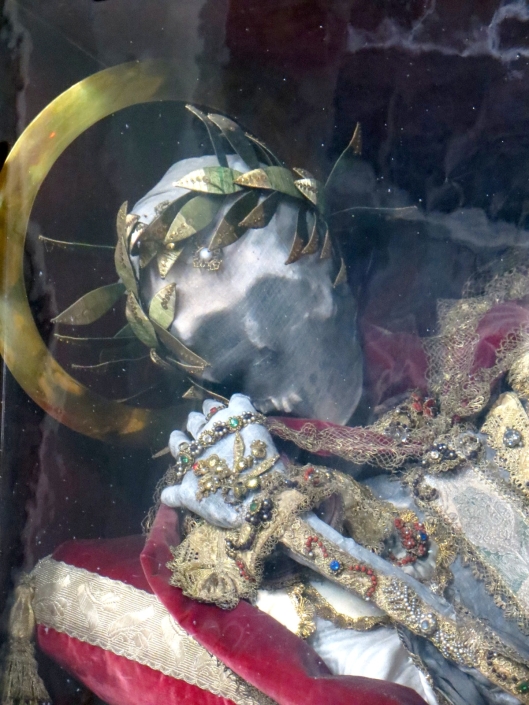 The Work of the Dead

In the third century BCE, Diogenes the Cynic famously insisted that a corpse was mere matter, fundamentally profane and profoundly irrelevant.  To emphasize his point, Diogenes ordered that upon his death his own body should be tossed over the wall of the city and be left unburied.  His friends were stunned.  “What!” they replied.  “To the birds and beasts?”  “By no means,” he answered.  “Place my staff near me, that I may drive them away.”  “How can you do that, for you will not perceive them,” they responded.  “How am I then injured by being torn by those animals, if I have no sensation?” he rejoined.[1]

In The Work of the Dead:  A Cultural History of Mortal Remains, historian Thomas W. Laqueur explores an intriguing question:  Why do human beings care for the dead?[2]  Laqueur observes that Diogenes, with his “seemingly commonsense rejection of all that decency and custom prescribe,” made the case “against the pretensions of the dead body more uncompromisingly” than anyone else in the Western tradition.[3]  Laqueur further contends that “[i]f Diogenes had not existed, we would have had to invent him,” because “[w]e need someone to insist that the dead do not matter so that we can respond with reasons for why they do.”[4]  As Laqueur explains, “[t]he history of the work of the dead is a history of how they dwell in us—individually and communally.  It is a history of how we imagine them to be, how they give meaning to our lives, how they structure public spaces, politics, and time.  It is a history of the imagination, a history of how we invest the dead . . . with meaning.”[5]  In short, Laqueur writes, the dead “are a powerful category of the imagination,” and then as now, “the corpse is their token.”[6]

On 31 May 1578, laborers along the Via Salaria in Rome uncovered something mysterious in a nearby vineyard:  a dark, forbidding hole that disappeared deep into the earth.[7]  Further investigation revealed the hole to be the entrance to an ancient, subterranean cemetery known as the Coemeterium Jordanorum, or Jordanian Cemetery.[8]  The discovery of other ancient cemeteries soon followed.  Begun in the 1st century, these burial places were initially known as hypogaeum (a subterranean place) and later as coemeterium (a sleeping place).[9]  We, however, have come to know these Roman cemeteries by a different name:  the Roman Catacombs.

View of the Roman Forum.  Photo by Reliquarian.

The cemeteries of the Roman Catacombs are linked by a multitude of galleries that cross and recross each other to form a vast labyrinth beneath the city.  As J. Spencer Northcote and W. R. Brownlow explain in Roma Sotterranea, “The galleries are from two to four feet in width, and vary in height according to the nature of the rock in which they are dug.  The walls on both sides are pierced with horizontal niches, like shelves in a bookcase or berths in a steamer, and every niche once contained one or more dead bodies.”[10]  Note that the Roma Sotterranea, published in 1869, states the niches “once contained one or more bodies.”[11]  In 1578, the bodies were still there.

Holy relics were anathema to proponents of the Protestant Reformation.  In his Treatise on Relics, for example, John Calvin railed against the use of relics as objects of worship.[12]  Early Christians, he wrote, obeyed “the universal sentence, that all flesh is dust, and to dust it must return.”[13]  In contrast, later Christians disinterred the bodies of the faithful “in opposition to the command of God . . . in order to be glorified, when they ought to have remained in their places of repose awaiting the last judgment.”[14]

Protestant disdain for relics, however, was not limited to verbal expressions of disapprobation.  Throughout Protestant Europe, countless relics were also physically damaged or destroyed.[15]  Paul Koudounaris observes, “Not even the esteemed church fathers such as St Irenaeus were safe.”[16]  The saint’s “nearly 1,400-year-old remains in Lyons were burned and cast to the wind by Huguenots in 1562.”[17] 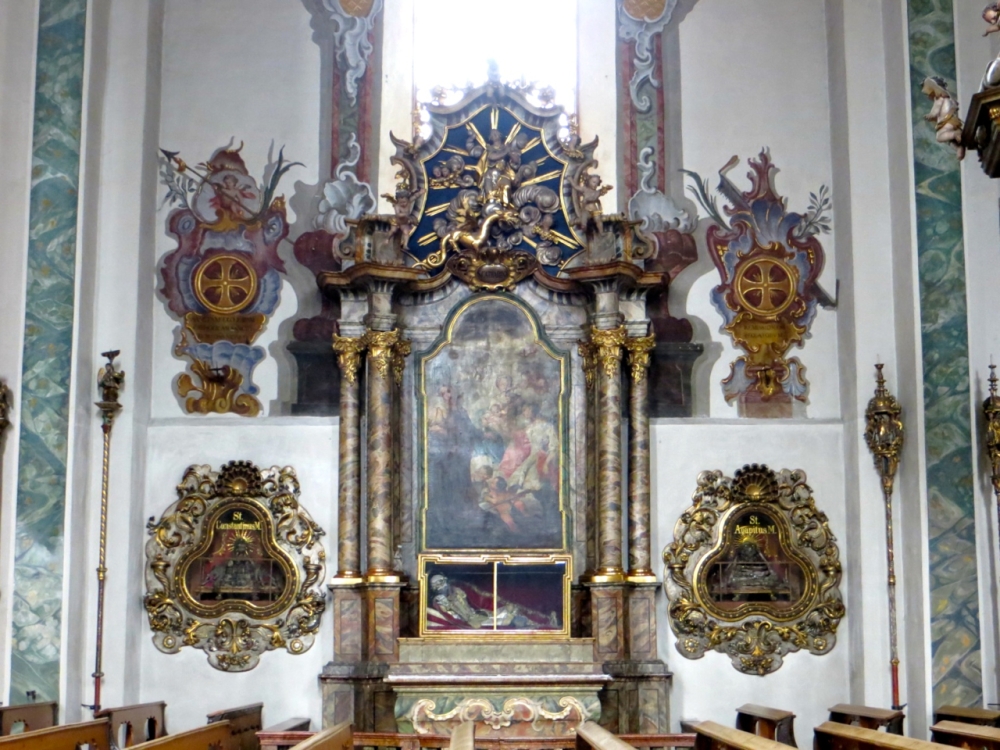 The Council of Trent, which met between 1545 and 1563, sought to address issues raised by Protestant reformers, including the preservation and veneration of holy relics.  Ultimately, the Council reaffirmed the significance of relics, declaring that “they who affirm that veneration and honour are not due to the relics of saints; or, that these, and other sacred monuments are uselessly honoured by the faithful . . . are wholly to be condemned.”[18]  However, acknowledging that relics had been the subject of much abuse in the past, the Council also introduced strict rules governing their visitation and authentication.[19]  For example, the Council declared that in the veneration of relics, “every superstition shall be removed [and] all filthy lucre be abolished.”[20]  The Council also required all new relics to be officially recognized before they could be offered for veneration.[21]

While the Council’s decision provided a doctrinal resolution to the relic debate, many churches now faced a more practical problem:  the Protestant Reformation had created a shortage of holy relics, particularly in areas close to Protestant regions.[22]  Given this scarcity, how would Rome meet the renewed demand for sacred relics?  Where would churches find new relics for devotional display?

The discovery of the Roman Catacombs seemed to provide a providential answer.

Invasion of the Body Snatchers

In his arresting book Heavenly Bodies:  Cult Treasures & Spectacular Saints from the Catacombs, Paul Koudounaris notes that after their discovery in 1578, the dusky passageways of the catacombs became the focus of a “public obsession.”[23]  Koudounaris writes, “While no one was quite sure in the early years whose bones were down there, the consensus was that they must certainly be sacred because they dated from the blood-soaked days of state-sponsored persecutions.”[24]  In other words, it was believed the bones were those of early Christian martyrs.[25]

Soon, bones began to trickle northward as churches sought to replace relics lost during the Protestant Reformation with the bones of Katakombenheiligen or “catacomb saints.”[26]  These relics were officially authenticated, as required by the Council of Trent, although identification of could be tricky.  As Koudounaris explains, relic hunters first looked for funerary plaques identifying martyrs, but “[i]f the word ‘martyr’ was absent, a capital ‘M’ was considered sufficient as shorthand—although ‘M’ was also used in Roman times as an abbreviation for the name Marcus, memoria (memory), mensis (month) or manis (dead).”[27]  Similarly, the abbreviation sang, or simply sa, were believed to mean sanguis (blood).[28]  In the absence of written clues, symbols were used to decipher the graves of martyrs.  For example, the presence of a palm frond, long understood to be a symbol of martyrdom, could denote a martyr’s tomb.[29]  Alternatively, the presence of a phial or ampule was understood to mark the grave of a martyr because, it was believed, a sample of a martyr’s blood was commonly interred with the martyr’s body.[30]

Meanwhile martyrs lacking identifiable names were given new names in a process known as battezzati or “baptism.”[31]  Some were named after popular saints, such as Saint Boniface.  Others were named in Latin after virtues, such as Constantius for constancy, Clemens for clemency, or Innocens for innocent.

Churches treasured the relics they received from the catacombs, and they carefully prepared them for display in a manner befitting their stature.  Full skeletons were especially prized, although reconstructing them correctly could be difficult.  Koudounaris explains, “For extensive reconstruction, the bones would usually have to be sent to experts, most often to nuns who specialized in working with relics.”[32]  In addition to possessing the appropriate religious temperament to work with relics, these nuns also exhibited tremendous skill with textiles and the decorative arts.[33]

Once fully reconstructed, catacomb saints were lavishly decorated with gold, jewels, and sumptuous fabrics.  According to Smithsonian Magazine, the bones were frequently wrapped in a fine gauze to prevent dust from settling on the relics and to use as “a medium for attaching decorations.”[34]  Additionally, “[l]ocal nobles often donated personal garments, which the nuns would lovingly slip onto the corpse and then cut out peepholes so people could see the bones beneath.”[35]  In some cases, a nun would add her own ring to a skeleton’s finger as a personal touch.[36]

The resulting displays were majestic, resplendent, regal—though a modern observer might describe them as creepy.  Some catacomb saints wear wax masks over their brittle skulls.  Others feature glass eyes or eye sockets beset with jewels.  Many gesture as if still animate, suspended for a moment in time.

The men and women whom the catacomb saints were meant to inspire, however, responded positively to these displays.  They credited the skeletons with protecting their communities and working miracles on their behalf.  Some named their children after them.[37]  And when they died, many wished to be buried near them. 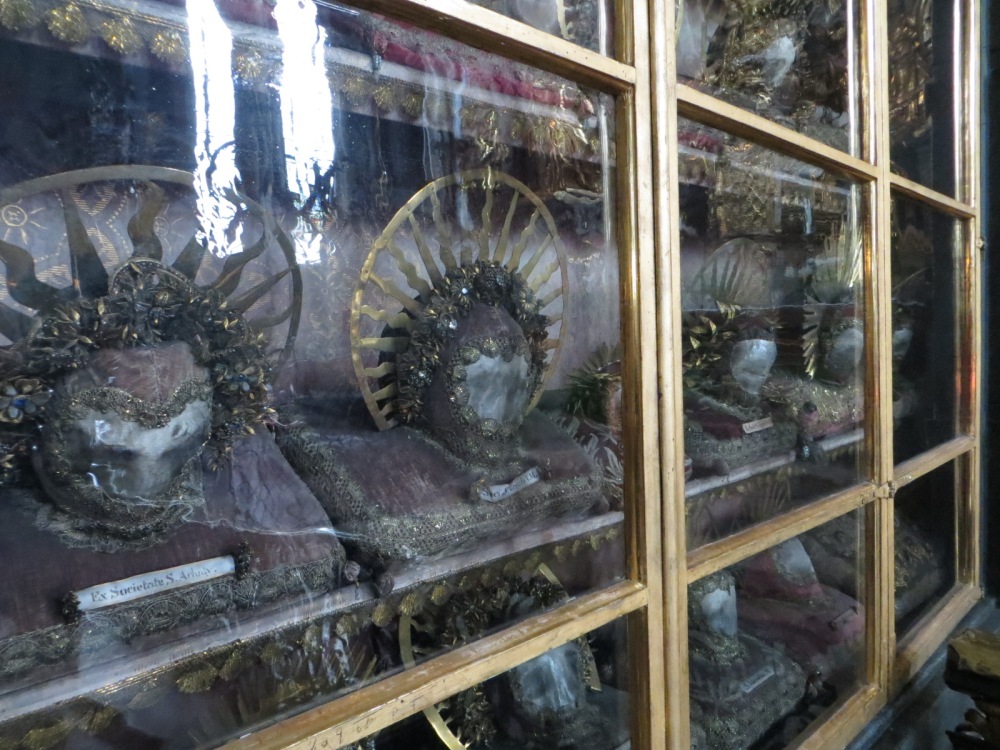 Waldauf Chapel, Pfarrkirche Sankt Nikolaus, Hall in Tirol, Austria. These skulls formed part of the collection of Florian Waldauf. Waldauf donated his collection to the church in 1501.  Photo by Reliquarian.

Ultimately, caring for the catacomb saints—the “special dead” as Laqueur calls them—was “a sign of piety, of love, of affection, and of religious devotion.”[38]  It was “a mark of civility and decency:  exactly what Diogenes rejected.”[39]  Saint Augustine had said, “The bodies of the dead, and especially of the just and faithful, are not to be despised or cast aside.  The soul has used them as organs and vessels for all good work in a holy manner.”[40]  Buried for centuries before their discovery, the catacomb saints are proof that Diogenes was wrong, that dead bodies are not irrelevant, that the dead do matter.  The catacomb saints were triumphs of the imagination invested with extraordinary meaning.  And they were recalled to life just when the Church needed them most.

[9] J. Spencer Northcote and W. R. Brownlow, Roma Sotterranea (1869), at 29.  As the authors explain in their preface, the book was based largely on Giovanni De Rossi’s two-volume Roma Sotterranea (1864, 1867), various articles from the Bullettino di Archeologia Cristiana, and other scholarly works and papers.

[20] Id. at 235.  The Council also prohibited the visitation of relics “by any perverted into revellings and drunkenness.”  Id.

[25] See, id.  Koudounaris states, “The relic hunters who descended into the catacombs . . . were specifically seeking the graves of martyrs.”  Id.

[26] Id.  Koudounaris cites a 1907 study of catacombs saints in Switzerland to provide a sense of the scale of the exhumations.  According to the study, Swiss churches alone possessed over 150 full skeletons and approximately 1,000 fragmentary collections of relics from the catacombs.  Id.

[37] Nuwer, supra note 34.  Indeed in some cases, nearly half the children born in a town after the arrival of a catacomb saint would be named after the saint.  Id.

3 thoughts on “The Catacomb Saints: Bedazzled Skeletons of the Counter-Reformation”